(In case the cheeky title didn’t communicate this well enough, there are going to be huge spoilers in this post for potential story beats for Shadowlands, based largely on Alpha datamining. If you continue reading, there will be spoilers!)

With Shadowlands, Blizzard has a unique set of opportunities for story that the game has traditionally had to backdoor into very carefully.

With a death theme and us going to what is effectively the afterlife of the WoW universe, lore-famous NPCs don’t need to be resurrected or hand-waved away to exist in the Shadowlands and play a part in the story of the upcoming expansion.

With that, I jokingly put forward the idea that Blizzard might be tempted to do a “WoW All-Stars” of sorts, and initially suggested it might be a dungeon or raid designed around us clearing through enemies of the past or corrupted spirits of former allies. On one hand, I think this could be awesome if done well, and would allow Blizzard to introduce some contextualizing lore to the game to show new players the history of the in-game universe.

On the other hand, well, such a thing would inevitably be something of a crutch and if overused, would read as a desperate effort to appeal to WoW fans without actually putting a lot of effort into the lore.

With datamining, we can see some cause for concern on this point, as well as some good spoilers! Let’s start with the good, or at the very least, interesting points!

We aren’t heading to the Shadowlands alone, it would seem: What broadcast text and scenario datamines exist seem to point to the idea that we’re heading in to the Shadowlands as part of a larger effort, although it may not be much larger. The most prominent datamining points to Tyrande ending up in Shadowlands as well, although it seems like she heads in of her own volition and has to be bailed out of Torghast by us, as part of a possible opening scenario that leads us into Bastion. A random event that happens during a Torghast run involving the Proudmoore family seems to also imply that Jaina comes with us as well, although there hasn’t been any other context to fortify this, so it is likely speculation based on that sole event. There are some other NPCs worth talking about in a different context, however… 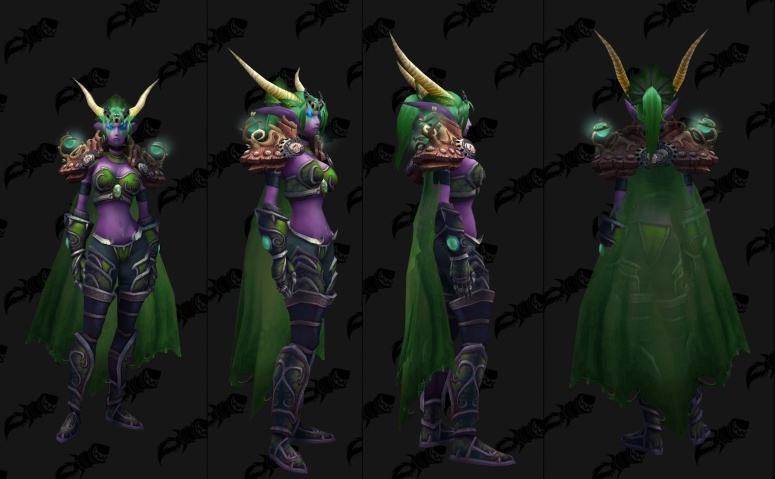 A lot  (A LOT) of infamous characters end up in Shadowlands: This was my chief point in my lead-in, and the one that I am most excited/concerned for. In no particular order, Shadowlands has appearances from Lady Vashj (now a Baronness!), Alexandros Mograine, Genn Greymane, Ysera, Kael’Thas Sunstrider, Uther, Kel’Thuzad, Hakkar, Bwon’samdi, Bolvar, Vol’jin, Tyrande, Sylvanas, Nathanos, and then the ones mentioned at Blizzcon 2019 but not yet datamined (Draka and Cenarius). Of those, a few have legitimate buildup within the story leading into Shadowlands – Vol’jin and Bwon’samdi are crucial to the initial tease of the story, Sylvanas obviously has a large role here and Nathanos would logically follow, Bolvar is a given, and Tyrande fits the lore of vengeance – she knows Sylvanas is in the Shadowlands and must give chase. However, the others are a mish-mash of various eras of Warcraft lore, and some are somewhat unexpected. Ysera has a possible out as she died relatively recently (perhaps also stuck in the Maw?) and has a natural and logical connection to Ardenweald, and Kael’Thas was already confirmed at Blizzcon 2019 and given the story hints given, could actually have a great story in Revendreth! Greymane is an interesting one as he logically fits, but also seems like he might end up being stuck in Torghast as Tyrande appears to end up with a similar fate. Uther was also pre-confirmed and given what we know of the Kyrian, he makes sense too.

However, the others seem like they could be fun, but that remains a mystery. Ysera, for example, has DK eyes on her new-ish model from alpha, which would seem to imply…a lot. Mograine and Vashj appear to be working together, based on the datamining, which is interesting. Kel’Thuzad and Hakkar are up to their usual hijinks, which is good for me – it suggests that this isn’t retcon central but rather characters logically responding to the new circumstances of their existence in the Shadowlands. It could end up going either way, so I’ll reserve any judgment in either direction until we know more. One thing worth saying, however, is that Nathanos appears, based on his database ID, to be a boss, while we know based on the Castle Nathria dungeon journal entries that Kael’Thas will be a first tier raid boss for us in Shadowlands. It seems to be a redemption effort rather than just killing him, so I think this could be good!

Shadowlands has relatively limited new NPCs and their lore significance isn’t quite there: On the flip side of existing lore characters, there’s the presence of new characters, like the Winter Queen of Ardenweald, the various Kyrian NPCs in Bastion, and Sire Denathrius of Revendreth. We’re presented with various views into the inner-workings of the Shadowlands – the Kyrians, with a sheltered underclass unaware of the presence of evil Mawsworn Kyrian in Torghast and leadership who would prefer to keep things ordered and sheltered, the seemingly-benevolent Winter Queen who has understanding of the events happening all over the afterlife and is working to prevent evil, and Sire Denathrius, who leads Revendreth while also infusing the Maw with large quantities of Anima in service of the Jailer. As with the past expansions of WoW, our presence upends the order of things all over the Shadowlands, as we expose the issues of Kyrian society, aid the Winter Queen, and expose Sire Denathrius after initially allying with him as no one outside of the rebellion in Revendreth were aware of his plot. Of these plots, my assumptions from current datamining is that the Kyrian will serve a role, given that Uther is now one of them, and the Winter Queen seems highly instrumental in both Ysera and Tyrande’s involvement in the story. However, outside of that, it remains unclear how much we’ll get from other NPCs. The Jailer remains highly secretive in the current data files,  Sire Denathrius serves the 9.0 story well and then is (apparently) killed in Castle Nathria, and Mueh’zala (the Sandfury death loa who got Vol’jin to appoint Sylvanas Warchief!) is seemingly dealt with in a dungeon. Currently, it seems difficult to find a new NPC that serves a role that could last outside of the confines of the expansion, or even just the initial launch story.

Having an order to the zones makes the story better: Not a huge spoiler here, but what little we know of stories past Bastion make it obvious that Blizzard does much better writing a linear narrative instead of disconnected zone stories. Even when, as was the case in BfA, the stories all loosely relate regardless of chronology, having a causal chain of events allows the story to build to a crescendo. The events of Ardenweald reach into Revendreth, and it seems like the early work we do in Bastion establishes the threat of the Maw and builds the foundation for the story better than Blizzard has done the past two expansions. As much as I love zone scaling for leveling (unironically, I enjoy it a lot and having multiple viable paths through content is great), it made Legion and BfA worse from a story perspective as the zones had to be very disconnected – Legion’s zones felt like multiple stories that were only related because some Legion-affiliated badness happened in each, and BfA was largely just understanding the local regions and their people and cultures, with the 120 questing pulling it into a frame (a task which I think BfA did better than Legion, although not without serious flaws of its own!). My sincere hope is that the story builds throughout – yes, sure, show me the interesting things of each zone, but also, give me a steady central narrative that is substantial and hefty, and has consequences throughout the expansion!

For as complete as certain parts of Alpha seem, the story does not seem that: I’m sure that the story is done, and Blizzard’s testing methodology for an expansion dictates limiting access to keep people on a path, to have more eyes at once on the way of things. However, through datamining, we know that Revendreth has a large story that seems fairly well complete or close enough to it. What we haven’t seen much of is Ardenweald or Maldraxxus. Maldraxxus seems to be most people’s least anticipated zone (just an informal observation from guild chatter and social media), but Ardenweald is both looked forward to (Ysera! Tyrande! Fairies!) and also integral to the story, as it seems that the Winter Queen very much is the informal leader of the disparate and united forces of the Covenants, facilitating cooperation between regions. Meanwhile, Oribos also seems to be MIA, and while at Blizzcon, it was discussed as our capital for the expansion, it also seems to have a dungeon tied to it, and the Arbiter’s described role from Blizzcon seems to fit more with the Kyrian at present, which makes me wonder just what role the Arbiter will play and if they’ll even be an ally.

All of this so far is fascinating to me, because it sets an interesting stage for us with many questions still unanswered (even after all of this datamining!).

-Why did Mueh’zala move to install Sylvanas, and what benefit does he gain from it?
-Winter Queen seems both benevolent (aiding the varying forces of Shadowlands) but also powerful (some broadcast text shows Bwon’samdi groveling to her and being ejected from Ardenweald)
-Rezan is around and apparently had his own deal with Bwon’samdi (a lot of question marks on how that all happened!)
-Nathanos is present, but to what ends?
-What will come of the Forsaken leadership and will we see Calia Menethil and Derek Proudmoore installed?
-To what ends do the Kyrian shroud the presence of Mawsworn from their own people?
-What would lead Sire Denathrius to a deal with the Maw?
-What is going on with all of these rediscovered NPCs?

With all of that, I find myself still rather excited for Shadowlands and its story!

4 thoughts on “The Shadowlands Spoiler Review From Datamining – Featuring Lots of Spoilers!”