The hype is reaching an unsustainable peak level now!

This weekend saw numerous developments that have shaped the excitement we all seemingly have for Blizzcon and an 8.0 announcement. 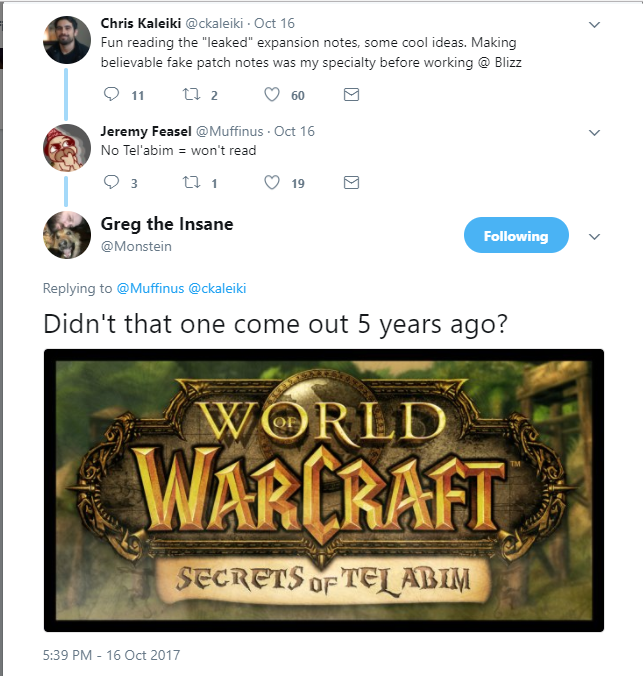 Firstly, a few Blizzard developers with the WoW team are on Twitter talking about the “leaks” and while fun, they aren’t close. A lot of this has been general discussion, rather than targeted at specific leaks, so there isn’t much more to this one. In the past, when leaks like Mists of Pandaria have occurred, the developers have denied the accuracy of those as well, so it is a part of the performance art that is the expansion reveal. 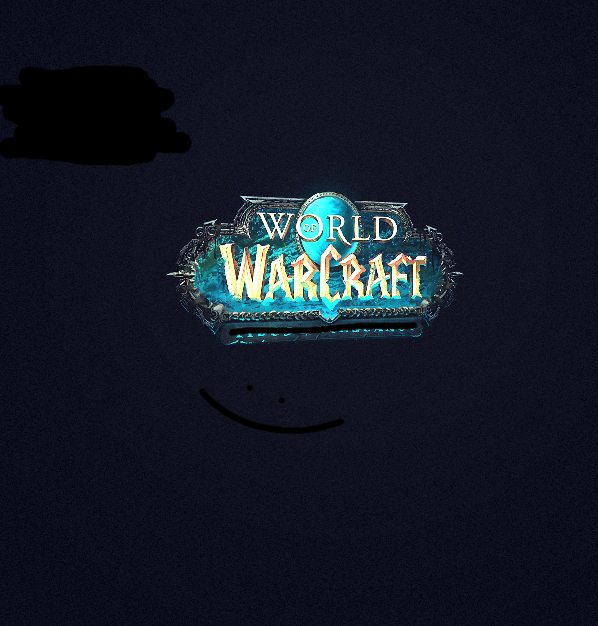 Speaking of leaks, the WoW subreddit then had what purports to be a next expansion logo – called Tides of Vengeance, they claim, but yet it is edited out of the image. It’s angled and a photo of a display showing the logo, so you know it’s legit! All kidding aside, it is a cool-looking logo, and the watery theme is plausible – as I’ve discussed before, while we think Old Gods and Void are likely, an all-sea expansion could very well work too, especially since Azshara as a servant of N’zoth would serve very well as a bridge into an Old God 9.0 (yep, I’m already speculating about that too!). At the end of the day, not holding my breath on the veracity of that “leak” but it’s fun to look at and wonder.

Then, however…these next two are CRAZY, and far less speculative.

Dataminers posted something they uncovered in the 7.3 PTR files, but hadn’t really been noticed in the heap of other content in that patch. There are four new entries on the chrraces file (a file in the game database that tells the game which races can equip armor). This file indexes the models and customization options for each race, and for playable races, also indexes their character creation screen background and their character select screen background. These four new entries, interestingly enough, do have backgrounds for character creation and selection, and…they are existing backdrops for other races. the four races are Void Elf (using the Night Elf backdrop), Lightforged Draenei (using the Draenei backdrop), Nightborne (using the Blood Elf backdrop), and Highmountain Tauren (using the Tauren backdrop). Some of these seem logical in the context of our current lore (Lady Liadrin and Silgryn discuss how the Blood Elves came to align with the Horde, and Silgryn is greatly intrigued, Draenei are…Draenei, and Tauren…duh) but what is most interesting in Void Elves. Sure, in lore, Alleria is a hardcore Alliance NPC, still technically against the Horde, and she has Void powers as an elf, but this raises a ton of questions. How much in-lore time passes between 7.3 and 8.0? Does Alleria have to like…breed to make Void Elves, or is this just a power infusion that could be done to any Night Elf? Could a Void Elf be a Holy Priest? Can my Demon Hunter be a Void Elf? The model datamined is untextured but also very clearly based on Blood Elves…so how much changes with that race option?

What’s cool is that these seem to be hinting at subraces, a long rumored and oft-desired feature to allow more character customization without a new race. Traditionally, this desire has been invoked for things like non-human Undead, various Dwarf tribes, and Mag’har Orcs with brown skin instead of green. Will we get these? Who knows? However, after this find, it does seem far more likely.

Lastly, Amazon and Penguin Random House both put up a page for a new World of Warcraft novel. Titled “Before the Storm,” it’s barebones description indicates it is our story bridge into 8.0, detailing what happens after Shadows of Argus. Its release date is currently scheduled as May 15th, 2018 and most curiously, it also has a full page count from the publisher, indicating that it is complete and ready to release. However, in addition to the barebones story summary, one other thing stands out as funny to me – the cover art, or lack thereof. Amazon doesn’t show anything, but the publisher page…take a look! 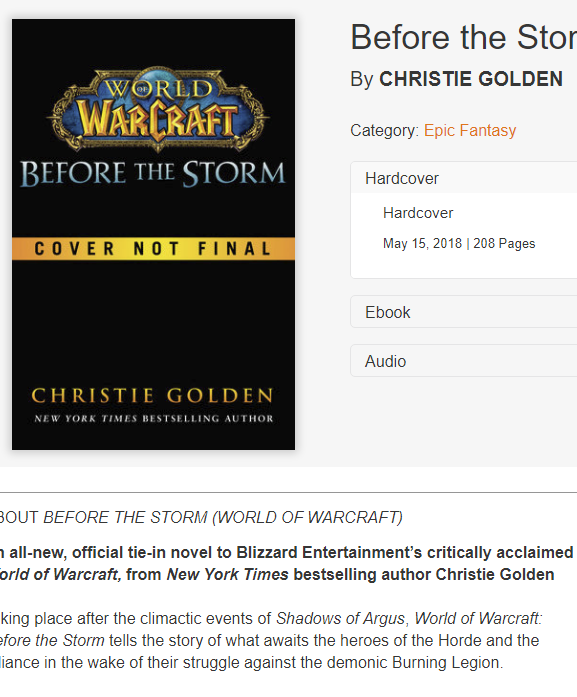 I mean, I was already really hyped for Blizzcon, especially now that I leave in 9 (!!) days, but this is just further cementing that hype.

Or, I mean, Blizzard could not announce an expansion, and then I think it’d be hard to arrest 30,000 people for arson when the convention center burns down. 🙂