So this was missed last week as I was travelling back from a work trip in San Diego – but what a two week span of gameplay!

Ahead of the Curve: Kil’Jaeden – oh yes, finally, everything clicked as it should and we won! This fight was killing us for weeks, but each week we inched a bit closer, until the week before last we had a 5% wipe. It’s a brutal fight, with lots of soak mechanics, and the overall difficulty of the fight is built on unrecoverable fuckups. If one person misses one major mechanic, the fight will end unfavorably, you can only really stall it out for a while. This also means my DH now has both of the Kil’Jaeden challenge skins! Hooray! On to Antorus! 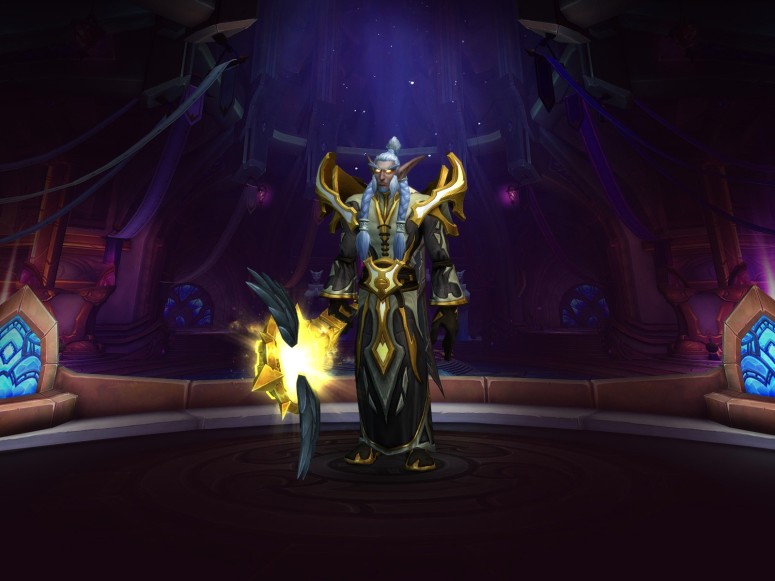 Discipline Priest Artifact Challenge…Complete! – this one was both fun but a bit frustrating, although not for the reasons you might suspect. Discipline, as you might imagine, gets a different challenge scenario. While every other healing spec gets the Black Rook reclamation, Discipline gets to fight Tugor Bloodtotem – alone. It’s a fun little challenge, one built for DPS specs, but it has some twists that challenge you (the Fel Burst mechanic is best done by using Fade, as the artifact trait Vestments of Discipline means Fade also has a damage reduction built in for a few seconds). It took me about 25 tries, all told, at 921 item level, for it to fall over. The hardest parts are the erratic pathing of the worm, since you need him to hit Earthquake patches, and dealing with the egg phases, basically requiring you to talent Halo and pop it just right. I can see why they didn’t get Black Rook hold after about 20 attempts at that challenge on Holy spec, since it’s built to require a juggle of damage and healing, a game which Disc excels at. But in the end, while it felt suitably challenging, it was a bit of a letdown. Success hinges on dealing with the Fel abilities properly and ensuring that you can alternate Psychic Scream interrupts with Smite absorption/Power Word: Shield/Vestments of Discipline empowered Fade. If you manage your cooldown durations properly, you get Tugor down, and when he is down, you’ve effectively won unless you fail to recover before tackling the worm.

To further talk about this, I did put in some serious attempts on my priest in the Holy challenge as well. It is far harder, with the first phase alone being a substantial challenge. I agree with many assessments of this challenge – it is very difficult and the worst part is that even a bad attempt will take at the very least, 10 minutes, so you cannot push as many attempts as you can with the other challenges.

Alt Play – I put in precious little time on non-priest alts this week, basically just taking my Monk, Priest, Druid, and Death Knight through some Mists of Pandaria soloing. My Death Knight has grabbed my attention. I was hearing they were flavor of the month, and that their DPS is high. The problem is, I was levelling Frost on mine. I actually didn’t like the concept of Unholy as much, as I tend to like melee specs that feel fast and frenetic (hence my maining a Demon Hunter!). However, I decided to dump some AP into Apocalypse and boy, is it more fun than I expected! It is a slower spec, yes, but as an alt player, it is a breath of fresh air. It has rotation complexity via maintenance of Virulent Plague and Festering Wounds, alongside strong AoE damage and pet management. Even with the passive talent, Easy Mode build from Icy Veins, I was doing bonkers damage and felt pretty strong. So I took her to Argus to start the quests, still in Unholy, and it felt pretty darn good. I’m probably going to stick with that spec for a while, which surprised me given how little I’ve enjoyed Unholy in the past. I think I’ve only ever seriously played it for about 4 months of patch 3.3, when they made Scourge Strike benefit from Armor Penetration (what a throwback!).

Class Mounts – decided to return to some alts for this, so while the Stormheim invasion was up on Sunday in NA realms, I ran my Warrior, Death Knight, and Shaman through for the Nethershards in prep for the Shard Times quest. Now I just have to do the Sentinax Marks on each of them, but finding groups for that has gotten harder. I hope to get all three this week, before heading out for Blizzcon – getting them all will put me at 8 out of 12 class mounts done!

Rampant Speculation – lastly, of course, I’ve spent tons of time out of game reading every purported leak, every spec of information or theory, and just generally hyping myself up for Blizzcon next week. I am very excited! Very! I think this is going to be a huge Blizzcon for WoW, and I think so many elements of the schedule and map illustrate this. While Overwatch is, in many ways, becoming the new mainstream face of Blizzard, it seems that in terms of ongoing content development and passion, WoW is where it is at.

And you better believe I’ll be posting my journey, every step of the way!

3 thoughts on “My Week in WoW – Week Ending 10/24 – Another Mage Tower Appearance, Unholy DK Gameplay, and Ahead of the Curve At Last!”