This last weekend brought with it the last Final Fantasy XIV fan festival of the 2018-2019 season, and with it, the remaining expected bits of news about Shadowbringers, the upcoming third expansion for the game.

The thing that is interesting to me as a WoW-first player is how interesting the schedule of these events is. Blizzard only has one Blizzcon, so there is a stacked panel schedule on expansion reveal years with the What’s Next, some sort of design panel, some sort of art panel, a Q&A, and usually a press blitz of interviews with damn near everyone on the team who is comfortable in front of a microphone.

FFXIV, on the other hand, plays harder for a global audience. Shadowbringers was unveiled at the 2018 fan fest in Las Vegas, with a few details shared – an initial trailer, a tease about gunblades, and the speculation that resulted. The European fan festival in February added more details, revealing the job the gunblade belongs to along with some zones and additional trailer duration. Let’s not forget the Alliance Raid reveal, which is still one of the craziest things about the expansion.

And that left the Japanese fan festival, Square Enix returning home to Tokyo, to discuss the remaining major reveals. While I am fairly positive on the reveals, there is some contentious stuff to discuss, so let’s dive in!

The First – Alternate Dimensions Away

The earlier announcements showing off various zones in the expansion were always cloaked in this mystery of where they were, which the team played up on stage to build the tension. JP fan fest brought the confirmation we were waiting for – the zones are in The First, an alternate world to the one we currently play in.

For those not versed in the FFXIV lore, the world is called Hydaelyn, with Eorzea being the collection of zones in the initial game continent – basically everything currently in the game with the exception of Kugane/Yanxia/Azim Steppe/Ruby Sea. Hydaelyn, as a world, has a Source (the world we are on normally) and fourteen copies, each with their own history. The First is, well, the first one of these. We’ve interacted with the First before in the lore, as the Warriors of Darkness we previously fought were from this place.

The First is a unique place, in that while the outlay of the land has some similarities to ours. The port city of Limsa Lominsa is in the first – sort of. It is instead called Eulmore, and is a place where a wealthy aristocracy waits out the doom of the world due to its lack of darkness, while slums grow around the base of those waiting and hoping to make it into the city some day.

However, the biggest similarity shown to us at this stage was a centerpiece of the trailer – the Crystal Tower. Originally integrated into the game during A Realm Reborn, the Crystal Tower was the setting for the 2.x Alliance Raid series, and was itself fan service, being an element brought in from Final Fantasy III. However, it had a unique lore added for FFXIV, and this is set to be drawn upon in bringing it back to prominence for 5.0. Where the Crystal Tower is a lonely structure full of evil in the Source, in the First, it is the foundation of a city, the Crystarium, which was also shown off at Fan Fest. Interestingly, the Crystal Tower in the First was not there to begin with, but was built later. Why it happens to conveniently match ours and be in the same location in the First is bound to be a plot point as we move forward!

The next big reveal was the remaining job – Dancer. While a ton of speculation had Dancer coming, as it was a job in Final Fantasy XI and seemed like it would fit well, the speculation was that it would be a healer job. Nope! Dancer is a ranged DPS. While I am slightly bummed that it isn’t a healer, the job still looks pretty cool and I am interested in seeing how it plays. The idea of ranged DPS is interesting, since their weapons are throwing knives, which is kind of a cool visual toolkit to play with and the animations they showed off were very well done.

Lastly, the race news. While we knew we’d be getting Viera for sure since EU Fan Fest in February, the mystery hanging over the announcement was if Viera could be both male and female, or if they’d genderlock the race. While the lore was setup for the genderlock to make sense, the team responded to backlash over genderlocking Miqo’te and Roegadyn in FFXIV 1.0 by adding the missing genders to 2.0, and so the thought of having a genderlocked race again felt like an invitation to that discussion again. Which made it baffling that they confirmed the genderlock, as Viera can be only female, and to offset this, they’ve introduced the Hrothgar, the worst kept secret so far, which are male only. I like the two races and don’t necessarily mind this, but I can see why people would be disappointed and I hope they revisit the discussion at some point. There can be lore used to add to this!

The last major bit of Shadowbringers content to discuss was the 8-player raid series, the meat and potatoes of the FFXIV raid game. Yoshi-P announced that the new raid series would be Eden, showing a single piece of concept art with a sprouting plant being grown in a gray, empty plain, with a single beam of light on it (ominous since light is the main enemy of 5.0!). Eden may continue the theme of being based on prior summons or major enemies of the games, as Eden was a summon in FF VIII and the idea of a light-locked world fits very well with the visual toolkit that would bring to mind. It was also announced that Eden would have a guest collaborator, none other than FF series mainstay Tetsuya Nomura! A character sketch he drew by hand was shown along with this unveil, which was interesting by the contrast – Gaia, the character he sketched, was clad in shadowy colors and carrying a large hammer, which is not a weapon type currently in game, and a lot of attention was drawn to that during the keynote by Yoshida (possible future job spoilers?).

Overall, that set the tone for the community discussion over the weekend – a lot of hype, but somewhat tamed compared to post-EU fan fest by the disappointments some felt in the race announcements and the lack of a new healer job for the second expansion in a row.

The 50th live letter on day 2 did set more concrete details for the path forward to Shadowbringers. We knew we’d be getting our last story patch for Stormblood this week, as that had been previously unveiled online, and we knew we had the FFXV collaboration event to look forward to, along with the data center expansions, world visit system, and then at some point in May we’d have the big live letter for pre-expansion, where we’d get to learn more details of the job changes and tuning we’d be getting for 5.0. Helpfully, the team put together a nice little graphic to lay out the road to Shadowbringers: 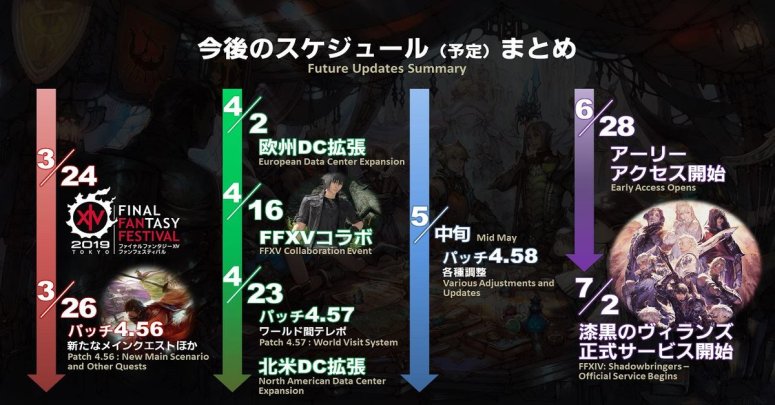 The highlights are this:

-The FFXV crossover is a limited time event, so if you want a 4-player(!) mount, act quickly.
-World Visit now has a set date for release!

Overall, that pretty much put a cap on the news for the weekend. Fairly light if you’re used to the WoW information dumps we get at Blizzcon, but the FFXIV team shares more regularly, so there is less need for a huge data shareout – we’ve been getting drip-fed news about forthcoming content since last November, which helps keep things feeling interesting!