It took about 8 months of planning, saving, and patient waiting, but it’s finally done!

Back last December, I thought really hard about building a new computer to play games on, especially since my first Twitch streams and YouTube videos were sort of meh, and some of that was due to a lack of performance from my (then) current system.

So I set out with a modest budget to buy a great Micro ATX system by March. I bought a case, a power supply, a hard drive, and an SSD. And then I was reading more into the hardware landscape, and it hit me that I wasn’t really prepared…

Firstly, I didn’t know about NVMe SSDs, at all. I knew of the PCI Express ones, but the last time I build a system from scratch was in 2011, and while I had helped friends build machines in the time since, none of the motherboards or processors in the price brackets I was helping build at could use one. But the prices had come down a lot, and the performance made me drool, so I started thinking about getting one.

Before I could imagine pulling the trigger on the system, I pulled the trigger on something else – changing jobs. That made getting the new system a further-off fantasy, so between the crypto boom, the wait for Ryzen parts based on the upgraded Zen + core, and the change in jobs, well, I was gonna have to wait.

But doing so paid off, in some ways – I was able to save, to more properly research my build, and while I did make a couple of purchases I didn’t use, I now get to use those to build a good system for my girlfriend!

The system has now been up and running for a week, and my WoW performance is fantastic – I can play at the 100hz refresh rate of my new monitor with no problems. Better yet, before writing this, I did a YouTube capture test and a Twitch test stream, and both were really great! So, in addition to more posts here (like this and the one going up very shortly after today!), I can finally resume those plans, and have more content coming out – just in time for 8.0!

So before the photos of the build, here comes the specs:

Ryzen 7 2700x CPU: I chose this because while the gaming performance of the Intel Core i7 8700k is slightly better, the price difference is greater than the gaming performance in percentage, and the Ryzen does way better at streaming encoding, video rendering, and 3D rendering, the other tasks that I do a lot of or want to do a lot of. So I ended up choosing to go with this CPU and it has been great so far!

Asus Crosshair VII Hero Wifi motherboard: It’s spendy, but it was the most USB ports onboard by A LOT, the best VRM design for steady power delivery, and lots of RGB LED lighting done well. Software features to merge Wifi and wired network connections can help with performance for online gaming and streaming, so I decided to go with this.

32 GB G Skill Trident Z RGB DDR4 3200 RAM: It’s fast, the ideal speed to help the Ryzen run at full potential, and it lights up pretty. What more can you want?

EVGA Geforce GTX 1080 Ti SC2 Hybrid: This one was a good deal, and well worth picking up. It is a watercooled Geforce GTX 1080 Ti, allowing the card to hit higher speeds more often with nVidia GPU Boost 3.0, and the design of the cooler allows it to run really quiet and cool. I hesitated to buy it since the rumors suggested that a new nVidia card will be coming out soonish, but I waited until Computex 2018 to see, and with no announcement made and a sale on this card, well, my decision was made!

Storage: My storage consists of 5 (!) different drives. My boot drive for Windows and my main storage for Blizzard games, Final Fantasy XIV, and a few other items is the Samsung 970 EVO 1TB NVMe SSD. It boots Windows in about 1 second, WoW very quickly, and the multitude of loading screens in FF XIV go away really fast. I wouldn’t recommend buying one unless you have a large budget – it’s not worth the price for the increase over a regular SSD, but if you want the biggest and best, it’s good. My other drives are two pairs – one pair of Samsung 850 EVO 500GB SATA SSDs for use in editing projects and media creation, and the other a pair of Toshiba 5 TB 7200 RPM hard drives to use for bulk storage. These are all pretty quick and work well!

Lights: There are a lot and they are pretty. The motherboard has some, the RAM has some, I have 9 fans that have them, and a Corsair Lighting Node Pro with more, plus an NZXT Kraken X72 for CPU cooling, all of which light up.

Lastly worth talking about, I held out to get the case I really wanted – a Lian Li PC O11 Dynamic in white, which has dual tempered glass windows and looks awesome! It allowed me to do some vinyl decals to light up with the LEDs, and I am really glad I managed to get one. 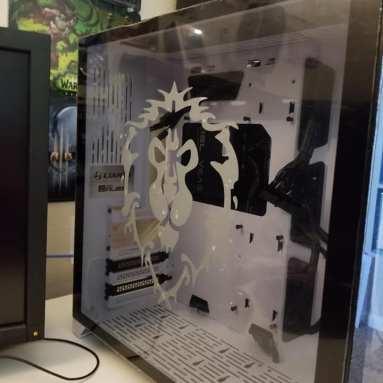 System running without the side-lighting for the logos:

And here’s the whole desk setup with a new monitor and some new decor and lighting! 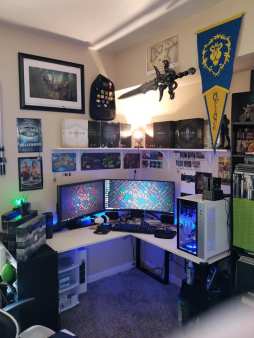 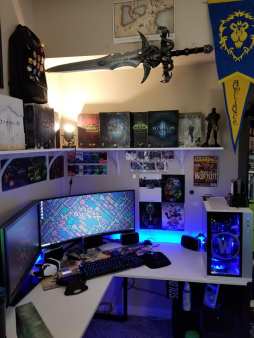 All told, I am really quite happy with the new setup and optimistic that with similar minor upgrades, I can make it another 7 years on this setup!